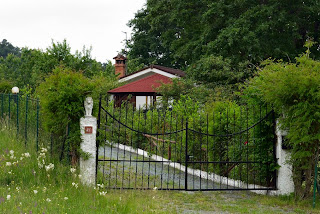 second house: a house were you rarely go. The second house is a typical way in which we italians waste the land. These areas were almost wild 40 years ago. Generally owned by small store owners they were built by a constructor who was also a local alderman. Some of these second houses were also built without clearance and regard for the presence of water, electricity and so. Every 5 years or less they were condoned by the national administration in charge. The cost of the condones were high since the local administration had to provide the above mentioned unplanned infrastructures. The infrastructures were provided by the usual local alderman who also owned a private small building firm. From the point of view of human geography they provide an interesting object of study due to the presence of decorative elements coming from people with a really low education and as such well exposed to television and others media suggestion, generally the builder shared the same low level of education. Some of these houses where also built by placing first a caravan and progressively raised condone by condone.