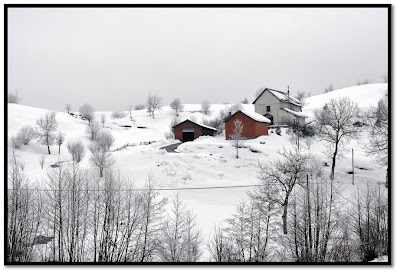 In "Language Thought and Reality" Benjamin Lee Whorf, advances the interesting thesis that the language either defines a boundary of the thinkable either carries the traces of the needs of the culture deploying it. To speak about something new is possible given an allowance to extend the language in the needed direction.
The sense he gives to the argument is obviously far more reaching, and precise, than my rather poor synthesis.

Landscape photography is mostly (with some exceptions) about spacial relationships. A place where the language to speak about spaces has been developed (in recent times and not so recent) is Architecture.

Among the numerous books read last year two have been, in the above sense, of particular interest.

One, Italian, "Il belvedere" by Monica Maffioli that gives an historical overview of the practice of architecture photography in Italy in the nineteenth century. The overview regards mostly the official side of photography about modern monuments and architecture/engineering work.
An interesting passages, unfortunately not fully developed, is about the introduction of industrial practice in photography. This was done mostly by the "Alinari" one of the first photographic illustration enterprises. They literally had several payed photographers getting around, mostly in Europe, with precise instructions on how to compose views what to take and have to have it look as desired. "Belvedere" equates, more or less, the "scenic viewpoint", mostly on the pragmatic side. It also has some sense of vantage point not properly rendered in the US counterpart.

The other book is "The visual elements of landscape" by "John A. Jakle", a geographer. An interesting book that tries to build a vocabulary to speak about visual properties of landscape. Mostly he draws from Architecture but along the path he gets into urban landscape photography. An interesting point is on space kinds. Positive and negative spaces are investigated along several points of view. Coming to the new ideas department I have to say that the return of the lecture is not very high. Nothing astonishingly new but a nice systematic overview, not a landscape thesaurus but the project of one. One of the pluses is the vast bibliography giving ample space to personal trips along the matter.
Posted by Unknown