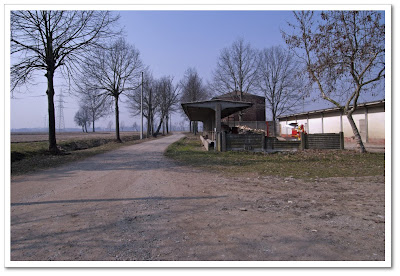 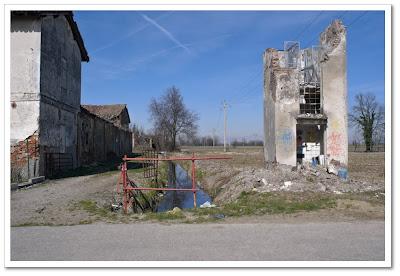 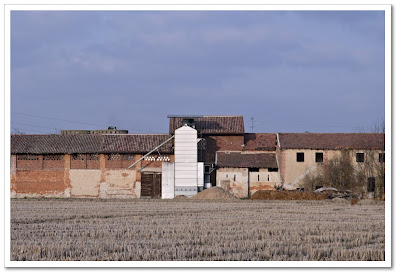 At first my knowledge of the PASM was limited to what I saw passing by a car on the Highways that cross it: a large collection of cultivated land and factories. It was only when I started to go there by bike that my knowledge of the place progressively expanded in a very material sense. So after some few short exploratory trips I decided to explore the place photographically. The aim was, and is, to understand if a subjective, and consequentially expressive, kind of landscape photography could be of actual use in describing my experience, as a viewer, there inside while preserving, or better, convoying, the needed informations to represent the place. A classical, documentary, approach is to photograph the main attractions like monuments, historical buildings or temporarily recovered green areas (eventually for the only time needed by the inaugural ceremony). There are plenty of those in the PASM. Then there are the factories and the various and related animals and breeds. The inventory of retrievable things goes on indefinitely and a photographic approach based on the traditional documentary practice, centered around the object, as the only consensual fact, is at risk to not preserve at all the visual identity of the place. The problem is that the entire park is almost a ruin itself. The ruin of a complex and extended hydraulic system, now far less efficient than in the past. The land, in its flatness, is the result of man made interventions that stratified in time. Water too is still drained by systems put in place by the Romans, the new thing is that now several waterways, formed by the emerging waters, have been transformed into sewage (this was planned by a bunch of modernist engineers back in 1911). So, for my documentary project, I've decided to take a subjective approach, trying to equate what I was seeing with what other ones certainly saw, albeit in a different light and a different identity, trying to preserve the emotional side without, hopefully, sliding to much in the painterly. I like to think about it as a documentation of the visual identity of the place, certainly made by the objects too but seen through their spatial relations. As far as I know only one other photographer, to whom I owe some inspirations, tried to work it out that way: Beniamino Terraneo. There has been some others that are well known, but they focused mainly on the institutional building, as it used to be in the tradition of the Alinari.
Posted by Unknown

Some interesting thoughts and photos in this series. I'm reading though the Bruno Latour paper now and just finished digging through Beniamino Terraneo's work. It's beautiful.

Thanks Mark. Beniamino Terraneo had a very interesting production. Unfortunately the part I'm referring to is not online. It was more on the stile of traditional (a la Adams) bw fine art photography. Anyway some views from the south of Milan are certainly here: