On Painting and Photography

Either painting either photography is part of the much broader human communication system generally called ``imagery''.

The common container tells us that there is without any reasonable doubt a family culprit in both.

At a first sight things stop here. Each imagery technique has it's own workflows.

So how could we get some profit from lecturing history of painting (and most important seeing them) regarding to photography.

The first problem is that art historians are not that aware of the photographic workflow, it is funny how respectfull are historians regarding ancient painting techniques while getting to absymal obvious regarding to photography. So eccept few cases do not expect a clear path, you have to find out your own.

A good support, at least for me, has been the reading of John Berger's writings. Looking at paintings the way they were conceived and for the use they were thought out gives you a lot of liberty margins to freely move trought the time.

Since this is a blog I will leave a lot to reader's own initiative in getting deeper here and there. I do not pretend to give out explanations but only to show pointers.

Conclusion will all be yours.

Being it analogical or digital modern photography workflow can been subdived in phases. The biggest reference here is Ansel Adams in his trilogy ``The negative'', ``The Camera'' and ``The print''.

Invention subsumes any kind of action, theory or else used to get to the decision of actually taking the picture. I borrowed the term from Leonardo Da Vinci ``inventio'' as used in his ``treatise on painting''. ``Inventio'' includes previsualization as practiced by Ansel Adams. Printing is any kind of stable projection of the image on a support (or format) suitable for the desired circulation. Inventio is more on the side of finding and assembling things in inespected ways instead of creating them ex nihlo.

Circulation: an example of a possible reuse of history of painting

Circulation. Looking into history there have been several changes in the way imagery of various type has been circulated. One of the most important, also from the point of view of photography, has been the introduction of the canvas between XV and XVI century.

As usual in those times things of culture happened in Holland or in Italy (Venice in the specific case). Rich traders had the necessity to show their own status to correspondants living far away (in relation to the times). The introduction of the canvas gave to painting a way to travel or to be exchanged, a thing frescoes could not do. Painting demand was baked by the will to show to others or more privately admire the owner's possesions from where they were painded. But most important, instead of representing desirable objects paintings become objects of desire by themselves. Objects of desire where precious and rare objects, pieces of owned land (landscape) and females.

A connected area of study could be the naissance of the phenomenon of copying. A mobile image if one that can also be locally copied. We know that a lot of painters started their work by copying other ones paintings. Some as a job some for emulation and study.

The relation between desirabilty of the displayed content and the object itself (the image) is one of the valued and recognised ambiguities in photography.

Most of photography is about the display of objects of desire.

A photo can be an object of desire itself at what conditions ? Some times ago Mark Hobston pointed out the question of size. There is a funny connection between image size and lanscape. Both have a common ancestor in real estate, in painting it has been true too.

But most important. For whom a photo itself could be an object of desire ?
Posted by Mauro Thon Giudici No comments: 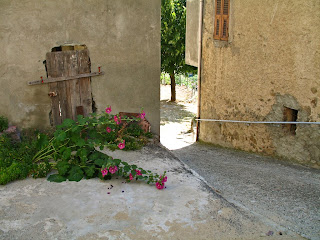 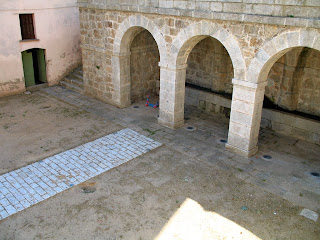 After reading some great works of J.B. Jackson I have come to the conclusion that the best work a landscapist could do is to give readouts as plainly and cute as he can. I good way to go is also to tell it in a correct and pleasant way.

Here are two snapshots I took in Corsica. Mostly they regard the way in which vernacular is expected to be consumed.

I am not that happy with them. Using a handheld snapshot camera is not my regular way to take pictures.
Posted by Mauro Thon Giudici No comments:

Being away from the internet for a total of 25 days in the last two months left me with a load of feeds to update myself to. After 2 days I am still at it. To be honest I have 2 hours a day dedicated to blogs so its 2 days for a total of 4 hours.

While scanning several blogs, you know how it works, you can have a better feeling of the recurrence of some themes the following is one of them:

Is there any sense in digging deeper in landscape photography to search for innovation or some kind of advancement.

More, is there anybody interested in those pictures ? Or in the lower end what to photograph for a landscape ?

In recent times (and not so recent for it being a recurring theme) i stumbled upon similar questions.

First a brief note: in the last decades (3 at least) the word ``innovation'' has shifted to a new meaning not that positive.

In some ways those thoughts seems to depresses me a bit. So i became used to this easy answer: I would like that there was some sense in taking landscape pictures anymore.

This feeble hope is based on the assumption that there is a genuine interest in knowing the way in which others see how life (almost only human as of today) goes on in this planet and the variety of ways of seeing that earth still offers and yes, there are no more European rhinoceros but there is plenty of suvs.

To cite one of my preferred:

``Just remember that you're standing on a planet that's evolving
And revolving at nine hundred miles an hour,
That's orbiting at nineteen miles a second, so it's reckoned,
A sun that is the source of all our power.
The sun and you and me and all the stars that we can see
Are moving at a million miles a day
In an outer spiral arm, at forty thousand miles an hour,
Of the galaxy we call the 'Milky Way'.
Our galaxy itself contains a hundred billion stars.
It's a hundred thousand light years side to side.
It bulges in the middle, sixteen thousand light years thick,
But out by us, it's just three thousand light years wide.
We're thirty thousand light years from galactic central point.
We go 'round every two hundred million years,
And our galaxy is only one of millions of billions
In this amazing and expanding universe...''

In taking pictures of the landscape there is always a documentary component, the need to document and communicate, at least, the event of seeing or its memory as in painting. I still do not understand much about truth (i am a bit to much on the relativistic side) but if it is the private vision which could convey it I am one interested in.

Observing the web it seems that there is still a lot of spaces to fulfill. New born on line magazines are coming in, the sizes are still poor but this could be a way to pursue an income. Certainly a more relaxed than blogs lecture could have it's own benefits for landscape photography. Sites could be a lot better and more intriguing. We could waste less in printers, papers and inks.

By the way the speed of the propagation of concepts is now astonishing. Ten years ago in the Internet (and in the the major US photo magazines about landscape) the ``sublime'' ruled in landscape. Today, it is possible to have different needs and satisfy them too (if properly displayed on a computer screen).

A last word on the term ``Landscape''. I have pointed out in earlier posts that there are several good definitions in geography for what is to be considered a landscape. But coming to photography, as usual, the term gets semantically ambiguous. Landscape is either a subject and either an outcome of the whole photographic process. It is a pretty recursion of landscape forming actions starting from the way the subject has been shaped. Photography has been and it is a powerful landscape shaping tool.
Posted by Mauro Thon Giudici 2 comments: