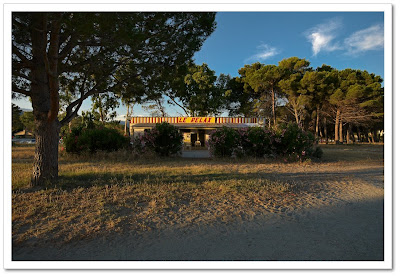 I'm leaving today for the first part of the family summer vacation. As any year the first part is dedicated to the sea. In the last ten years we've spent most of our sea vacations in Corsica (Corse France). I have no specific photographic plans except for some repeated visits to a megalithic site that has always fascinated me for its atmosphere coming from the place and the associated historical knowledge. The alignments are not so imposing as the ones in northern Europe but the relatively primitive state of conservation and the not to much crowded place compensate more than enough. I'll be back in fifteen days.
Posted by Mauro Thon Giudici No comments: 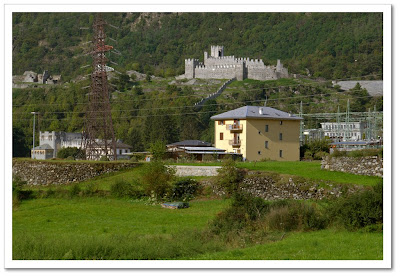 The big rock to the right of the castle is called "La rupe Magna". Some more info here.
Posted by Mauro Thon Giudici 2 comments: 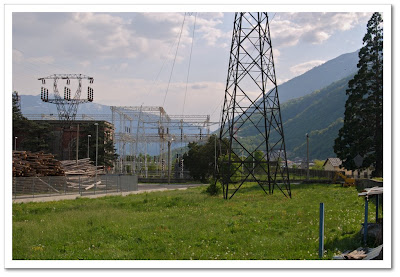 Recently I started to use a bit more Twitter. Still have to figure out the way in which it may be useful as a bidirectional com device. Mainly I'm using it as a support to this blog to share some references to things I go on stating here.
Several of the starting tweets (see the twitter's box on the left) have been about articles found in the field of neuro sciences. Mainly I'm interested in some evidences about the way in which we carry out visual thinking. Right or wrong these sciences could be, they are contributing in defining the line between "evolutionary" (immanent) or natural limits and the cultural ones (that can be learned or acquired). Frankly I'm still a bit uncertain about the possibility to gain insight in cultural phenomena through physiological evidences. But right or wrong these sciences may be, they are contributing in defining the line between evolutionary (natural) limits and the cultural ones, that can be learned, acquired and modified. But if neuro sciences have an indisputable experimental basis in showing evidences other "neuro thinkings" as it is the case of neuro aesthetics locate themselves in the realm of philosophical speculation. In such case they are, so to say, outside the scientific frame. It is the case of experiments in which paintings or other art pieces are presented to people being monitored for the cerebral activity. I will not question here the experiment, I'm questioning the choice of the "masterpieces" as being highly relative to the aesthetic beliefs of the observer/tester. It seems to me that the predominance of personal aesthetic judgment of the observer severely undermines the validity of this kind of experiments. On the funny side it reminds me something similar to the Pavlov's experiments carried out on dogs' salivation (just substitute dogs with "experimental subjects looking at a piece of Art"). At the end the outcome is the idea that "Art is something that gives pleasure". A rather generic assertion given that there are so many things that give pleasure not being art. Yes looking at a piece of Art is a pleasure but it is so as much as having a "good shit" (no references to Manzoni's "Merda d'Artista"). Not surprisingly most of the writings in neuro aesthetics I have seen are limited in their examples to a few well known and very limited cases all located in the past. Past times art has a questionable status when it comes to aesthetic value determination due to the presence of some other over imposing values as the one of being a survivor among the many of its time. And, given the cultural acceleration impressed by Internet, art from before 20 years ago is to be considered from the past. Those are not, any more, valid examples of contemporary art. For an aesthetic theory to be of some use there must be the inclusion of, at least, some correlation to what happened in the last 20 digital years and the newly raised, or adapted, practices in circulation and evaluation over the Internet of what is to be considered Art, with a special regard for the emerging social contexts.
Posted by Mauro Thon Giudici 1 comment: 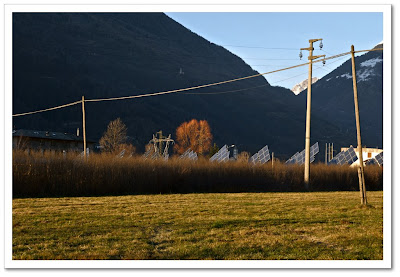 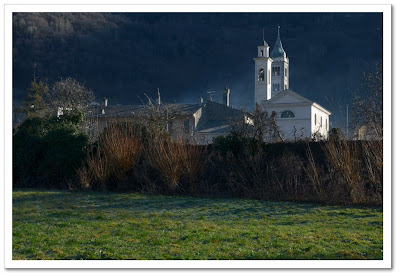 A character of Alpine places, as in the case of the area observed in "fondovalle", is the great contrast between light and shadows. Contrary to what recommended in the photographic manuals in this case there never is something like the golden hours. When light appears in the morning, from behind the peaks, the sun is already high in the sky. The same goes for the late afternoon where it disappears ways before sunset. This kind of light has its part in the general rough look of the central Alps landscape united with the steepness of the mountain flanks. Interestingly this harshness transpires in local people's characters, it's not certainly the land of the shades of gray, albeit light gray, the color of the granite sands and rocks, was the dominant color in vernacular buildings till 20 years ago. The picture was taken in December 2008 at midday. here is the location.
Posted by Mauro Thon Giudici No comments: 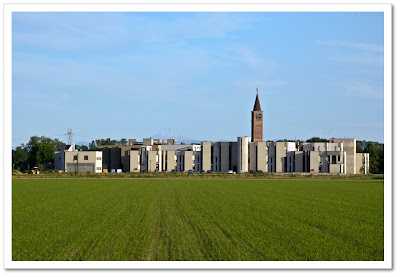 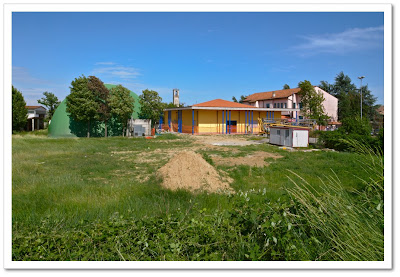 I've been asking myself if it was the case to explain the reasons in subject choice, and subsequent picture choice (it's photographic fiction in the end). Mainly it is cause I've liked something I saw. For "liked" I am referring to a broad category of feelings. Maybe it could be appropriate to say that I like to feel. As much as in "I like industrial music". Than there is the mimetic question in photography but this is a far to large question to fit here. More, in this case there is a visual critique to architects (and landscape decision makers) focusing only on the "building". Architecture, as any other Art, is performed every day by ordinary people e not only by the great schoolmasters. Ideas in architecture travel across the time to reach the borders of common sense and necessity as much as any other idea. As for the picture I confess to not like very much the derive toward simplification in the approach of European (mostly German) "clean photography" (historically, 30 or 20 years ago, it had its merits and excellence though). To me it feels to much in assonance to the general dream of simplicity that I fear is (in part) at the base of our, continental wide, right derive. On the side of colors, and contrary to general demand, I still like the saturated ones by Turner and as rendered by kodachrome 25 (Velvia being a derivative, that I never liked at all, in my latter film time my preferences went to AgfaChrome mainly for the green palette). In this case however I've been really conservative in the amount of saturation. Certainly you will see a different yellow than the one I see (the numbers being the same) but it is pretty near to how it was out of the camera (daylight white).
Posted by Mauro Thon Giudici 2 comments: 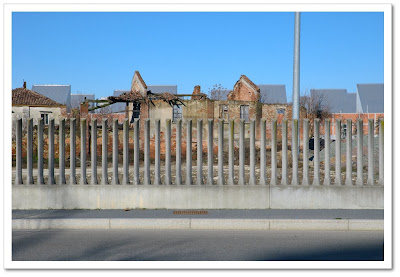 "The study of landscape history contributes its share to the new approach by reminding us, among other things, that since the beginning of history humanity has modified and scarred the environment to convey some message, and that for our own peace of mind we should learn to differentiate among those wounds inflicted by greed and destructive fury, those which serve to keep us alive, and those which are inspired by a love of order and beauty, in obedience to some divine law. The whole inhabited world, from the highlands of Peru to the heart of Asia is marked by vast circles and parallel lines and spirals, great avenues of monoliths, many dating back thousands of years: signs of our sense of responsibility for the survival of the earth and its people. Could much the same not be said of our immense grid landscapes, our geometrically designed cities, our parks and wilderness areas ? "
J.B Jackson "A Sense of PLACE, a sense of TIME"

NOTE: Added a few more lines to mitigate the somewhat apodictic flavor. Many thanks to Mike for the pro :-D critique.
Posted by Mauro Thon Giudici 2 comments: