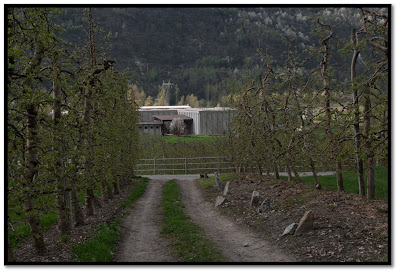 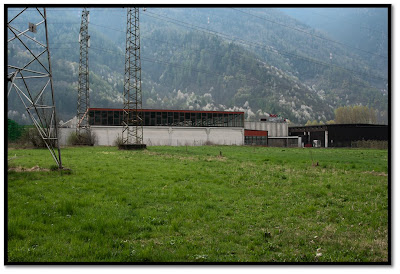 In the near middle of the Valley. Looking South. The same building as in the previous post. As said this theme (Fondovalle) is about a small fraction of the Italian soil in the Central Alps (Alpi Retiche to the north and Prealpi Orobie to the south). The area's surface amounts to roughly 20 square kilometers peak to peak. At the bottom of the valley ("fondovalle" in Italian) the, near, plain surface amounts to, more or less, 10 square kilometers.
Posted by Mauro Thon Giudici No comments: 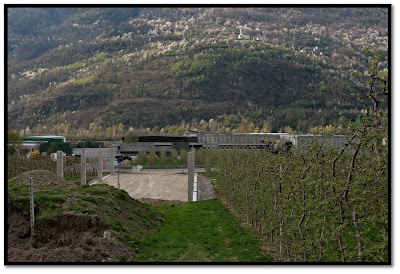 Just 700m south than the previous. While getting around I found myself staring at how it was in my memories. I do not remember very well how it looked. I remember more the perceptions I had at the time, like the one from the local river: Adda when it came down full from the snow melting or the smells or the noise of the trucks on the valley's main road (that at the time traversed the village).

To close this post a little leftover from December. This is just to balance the wrong impression of me getting romantic :-D 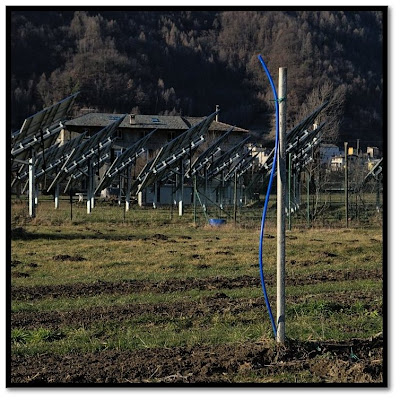 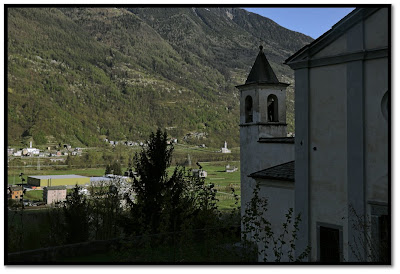 I spent the Easter Holidays in the Alps with my parents. While there i tried to follow my long going visual projects. I can't really call it a series. I am not even sure that a series, as the just ended one, works well when it comes to blogs. Here is a view of the bottom of the valley side to side. From south-east to north-west. The transition from light to shadow are always harsh, as life was in these places. An interesting thing is the natural clock made by the blossoming line of the cherry trees (you can spot them as the lightest trees on the opposite side). At the moment of the picture the line was at 700/800 meters. The clock will complete its cycle at 1400 meters in May. The side from which the picture was taken is the one that gets less light during any season. People living on this side formely named the ones in the sunny side "cech" (ciechi/blinds), the real "Costiera dei cech" (side of the blinds) is, however, in the lower part of Valtellina (the name of the valley). The area in observation is in the upper trunk of the valley, it is also called "Alta Valtellina" (Alta is for High). The location is here.
Posted by Mauro Thon Giudici No comments:

Truth or what remains of it in photography.

Before entering the question let me try to state an acceptable definition of what we, humans, mean for truth. Staying with the 'Tao Te Ching' truth may be derived from the not true. In general truth is defined on the basis of a shared acceptance or common sense and tied to what is considered not/un true in relation to a context.

Back at the times when photography was invented in the western culture context the shared convention about truth was a lot different from ours. The belief in an absolute Truth was strong. A strange monster made by Enlightenment rationality and Religious observance (or prudent ostentation).

If we look into to those times we can find for example that, more or less in the same times, Boole made some very bold statements about Truth. It will be called, later, Boolean logic. Since the Greeks (and if we stay with the ``Concise history of Mathematics'' even before by people in India), logic has been a model for rigorous reasoning. Axioms and rules to infer from them. At the time the dominant science, physics tended to an axiomatic form (or just got there). By the end of the century relativity and other development in physics and mathematics made some treats to logic and even more to the idea of a universal Truth. This lent to the development of a logic (or theory of truth) strongly based upon formal models against which formulate evaluable assertions. To put it briefly truth becomes relative to the model in which it is formulated, it follows that the model itself must be evaluable or at least fully given. A solution adopted in Humanistic sciences is the one from Popper where a theory to be considered science must at least declare what either is outside the scope of the model or could falsify it (this is to put it in a very simple way. Forgive me for the brevity).

In natural sciences the thing were a bit more funny, in the first half of the 19th, as for the attempts to calculate the age of the earth on the Genesis' base. In that segment the idea of Truth as being one and supreme constituted a strong model.

But what does it mean for photography in general ? A picture is a model in itself. I would say that it is a model of a perceived reality, the photographer's one. As a model it is, by definition, a simplification of the modeled. As a model it has a constraint from which there is no escape: linear perspective, without it there would be no photography, at least not in the known sense. From the constraint it follows that photography at large can only be a model for assertions in the Euclidean world. Color, including shades of gray, is an other strong constraint in the model, but here we have a rather undeveloped area of knowledge and a whole argument in itself, and truth, here, has a very limited reach to be useful. Truth, in color, can only be derived from the Pantone reference ? And which place has the color picked value ? Is my (3)A 2B (light green) truer than yours ?
Posted by Mauro Thon Giudici No comments: 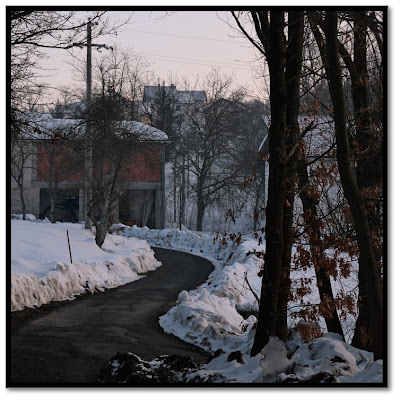 I'm closing here the series. It's springtime anywhere and I had enough of the snow (leaving out just a few pictures). I have assembled this series from the shots of a couple of days. Looking at the statistics I have to say that my sloppy blogging and the somewhat too much longer time scale had their ups and downs. Forgive me for the somewhat neurotic repetition of the title, in google terms it worked well. Probably a different way to present a series, as a whole, would be to have it compressed in a slide show. However slide shows are to much expensive either in composition time either in retouching (to have a constant look).
Posted by Mauro Thon Giudici No comments:

This is one of the three true vernacular buildings in the area. Of them only two are left more or less untouched. The owner of this one died a few years ago. I knew him.
Posted by Mauro Thon Giudici No comments: