When it comes to the net and mainly to the web, Art, and specifically Visual Arts, exhibit a love/hate behaviour. On one side it is quite clear that the reach that the media allows is hardly beat by anything else. However the relation with the audience is some how one way. Been shown is partly the nature of a visual artefact. But behind the “being shown”, profound differences in motivation are at work. Maybe there is little to say here, It is still the old “web as entertainment” against the “web of sharing” that is pressuring, interestingly enough the “web of selling” is usually left off. But in this case I would like to stop on the idea of the “web of sharing” as in the intentions of the web “founding fathers”.

One of the basic ideas is that the “audience” makes the Internet. And that is true and easy to appreciate. What is not always so clear is that the visitor is making the first move and you have to give something back for his/hers effort. Art world, in this model, seems instead more inclined to denial. Yes many of you may say that it is already enough to share a look at the images, as much as a nice woman shows of her ankles. It is not a case that many contemporary artists even deny themselves from the net or show off pictures of sizes so small that even a stamp collector would not be interested in them! Perhaps it is the way in which new technologies get adopted and evolved in time. But still the art world does not seem to have left the old gallery model where Art, in the form of commodities, is displayed as an object of desire. The flaw in this model lies in the way the audience is composed over the web. If we look at the most frequented internet places we'll discover that it is the interactive one that in the last decade took over. Instead of a passive viewer there we have and individual that expresses feelings and experiences reusing and sharing what was seen. It is the anti (post) structuralist “ready made” practice taking over in recursive expressive motion. I'm quite aware that this may be considered rather naive. Times of scarcity generally rise the question of how to fill the stomach too. Given this wonderful airy intro I'm finally getting to the point. I have been looking for a logo for my photo activity for some time . Given the hight costs I was oriented towards an in house solution. That was till a few days ago I've came across this nice initiative named TOBERND/YOURHILLA where the Artist Didier Falzone decided to give away some abstractions derived from the works of Bernd and Hilla Becher in the form of usable logos. I liked them a lot but more I liked the form of the gift. A logo does not necessarily explain or, in a pornographic way, describe. It must be first and foremost an object of interest. So after a few very nice mails I was able to have my own. Well, there are many emotional and utilitarian sides in my choice, however, I think that the Artist deserves a lot of appreciation for either the content (the logo itself) either the action. I have to give thanks to Hippolyte Bayard for bringing the thing to my attention. 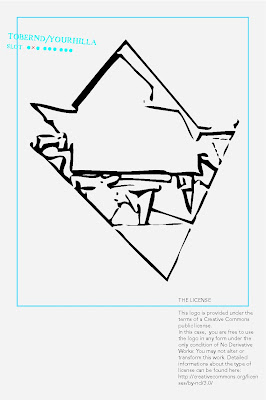