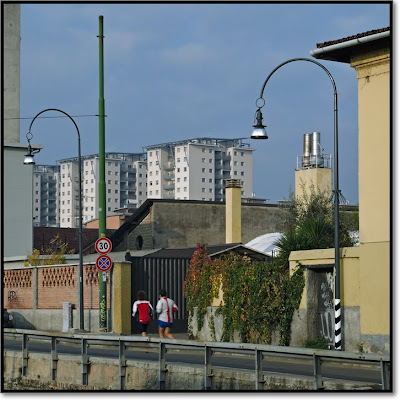 Life is full of contradictions. Back in the seventies I was involved in politics (in the so called extreme left) but at the same time I cultivated my interests in making photos and studying art by my own. My "comrades" always looked at me with a lot of suspicion given that those interests were seen as a manifestation of clear influences from the "consumer and imperialist devil". With time, and a bit more of positive perception of myself, I came to understand that in reality I was not that interested in "ideology" instead I was simply following my own view of the world. By the way that also made me quite suspicious of any kind of assimilating community.

One of the most striking contradictions I had in that time was my liking of the futurist art movement from the early 1900. In Italy, after the II world war, culture was almost all in the hands of the left. Futurist where, in some ways, strictly forbidden given their relations with fascism. Today I do not believe anymore in any ideology but I still like a lot "futurists".

It is not easy to differentiate "futurist" from, say, "cubists" or other "avangarde" tendencies of the beginning of the last century. The simplest thing that I can say is that "futurist" focused more on the rendering of the dynamism of the subject as opposed to the dynamism of the observer as in the case of the "cubists" (the connections are, in reality, more confused given the vast exchange that went on between the various movements).

When the futurist movement rose to fame Italy was entering a state of diffused industrial and economic growth. The city was the symbol of all that. The new materials used in architecture started to alter the time scale upon which the landscape could change. The change in landscape become perceptible on a one man's life time scale, and more, a it became a value. One of the "futurist" seminal paintings about this is "La città che cresce" by Umberto Boccioni.

Today things are a bit different. Given the tragedy we are producing in the ecosystem we no longer appreciate the modernist idea of changing as a positive value. But adaptation to a more environment wise world will require a lot of changes. Is this an other contradiction ?
Posted by Mauro Thon Giudici